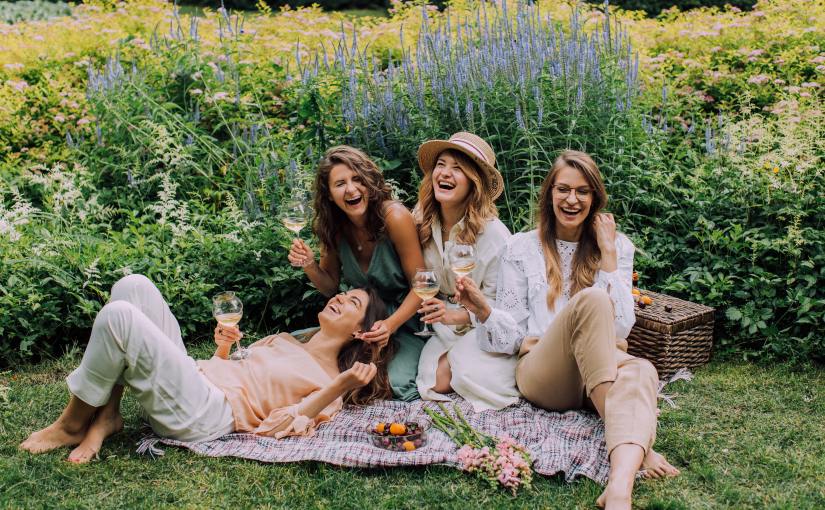 I met a woman at the grocery store recently and we struck up a conversation. She was enjoying a rare solo shopping trip since she has twins at home, I was shopping with my teenager while rather pregnant with twins of my own and we got to chatting a little. She was friendly, funny, gave me some tips on a few things twin related, then we parted ways. My daughter commented that she seemed nice but, “You didn’t ask for her phone number though!”

And a follow up question, if not by exchanging numbers with random nice ladies you meet, how the heck do people make new friends as a mom? Or like…at all?

I genuinely do not understand how grown ups make friends.

When I first got pregnant with my daughter, 14 long years ago, I had very few friends who were also at that stage just yet. As a result I definitely drifted away from a lot of the friends I did have, as our lives were just too different. I couldn’t go out every night or make plans at the last minute, and they stopped inviting me along eventually (understandably) as it became clear that it was pointless because I’d just say no or have to cancel at the last minute anyways. Or go home early. Or we just had very little to talk about anymore as my days revolved around diaper changes and the Backyardigans and theirs, well…didn’t.

Some friendships became stronger, and I had the privilege of experiencing first hand how amazing it is when your friends love your kids, like truly love your kids. My daughter acquired a few Bonus Aunts and Uncles along the way. But many friendships faded away until the people were nothing more than acquaintances.

Eventually many of my friends “caught up” (for lack of a better way to put it) and had kids of their own. In some cases this brought us closer again due to the shared understanding of being parents, but at the same time it often didn’t work out that way since our children were so far apart in age, the idea of getting together so the kids can play didn’t always make a lot of sense. More times than I can count we were invited to a “Bring the kids! They can all play!” gathering only to arrive and be surrounded by toddlers while mine was in grade school. Not that I’m complaining about being included of course, my point is just that the age discrepancy was glaringly obvious and often left me with that feeling like, “We still don’t really belong here.”

Most of the friends I’ve made over the years have absolutely nothing to do with motherhood. Most of them I met through work, some I met through mutual friends. Often when I meet women who are also mothers I quickly find we have nothing in common when it actually comes to the parenting part of life and that itself is enough of a reason for us not to become friends. Sometimes I meet the mother’s of my daughter’s friends and they seem nice enough. We can communicate civilly and make arrangements when our kids want to hang out, but it’s not like we’re meeting up for dinner or drinks or texting on a regular basis. (Despite the fact that every single time, my daughter insists we are going to be best friends.)

Part of the problem with making friends as an adult, especially when you’re a parent, is that there is no time to cultivate new friendships. I’m sorry but all I can offer you is a “We should get together soon!” text every once in awhile, followed by nothing because we don’t actually have time to get together. I’m lucky that the existing friends I do have are all basically on the same page at this point and never seem to get offended but it definitely means that a lot of time passes before I actually see many of the people I genuinely consider friends.

I know I’m not the only one in this boat because many of my very dear friends do the same. Life is just busy and carving out precious hours to meet up with a friend is difficult, even if we know we’ll end up having a great time and being thankful that we did it.

For me, especially now, it’s a little difficult because a few years ago I moved to a different province and I not only left all my friends behind, but I also haven’t made any kind of effort to make new friends since I’ve lived here. I have maybe 2 people in the general area who I consider friends (neither of them moms by the way) and one I haven’t seen in a couple years since we both left the job where we met, and the other I’ve never met up with even once the entire time I’ve lived here. It just never seems to happen, despite those “Oh we should…” talks that go nowhere.

Covid hasn’t helped things either of course, and for the last 2 years I could count on one hand the number of people I actually interacted with in person, for good reason obviously. But now I’m at the point where I don’t think I even know how to go about being social anymore. Carrying on normal conversations…what’s that like?

So all this is to say that making friends as an adult – especially if you have kids – is difficult. And I don’t know the secret, so if you figure it out, let me know.

I will probably be too busy or lazy to try it, but that’s ok. At least our conversation will count as social interaction for each of us.

Jokes aside, leave me a comment and let me know the best, most interesting, or most unconventional way you’ve made friends as an adult. I’m curious to know!

Mom of a teenager. Engaged to the love of my life. Dog mom. Video game and book nerd. Aspiring writer. Lover of Dungeons and Dragons. Craft addict. View all posts by Angela